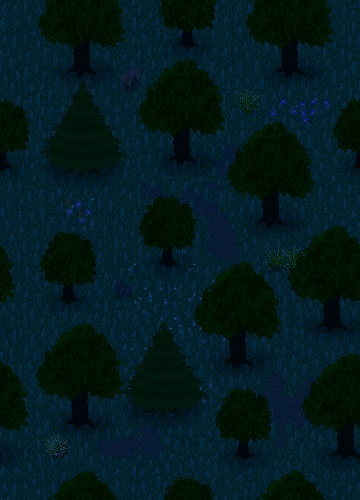 Blossom & Decay is a game about a newly settled continent in a fantasy world, where players experience settler life and can rise from rags to riches in a world of opportunity.
But it is a dangerous world, players need to collaborate and form groups to survive. Moving up the social hierarchy as the major form of progress causes players to heavily influence how the game plays out for each other. Jobs and tasks are created, as well as missions, contracts, and general relationships or feuds between players.
read more…

With the help of some players we've started Blossom & Decay's Wiki with basic information for playing the demo.

All the game's mechanics serve the idea that everything is created and arranged by the players through their discovery of the world. From learning which resources to find for making buildings or useful items, to quest planning, ordering of trade and goods, and how to interact socially for common goals.
The world starts in a vast wilderness with no settlements or friendly NPCs. Players will immediately make choices about where to go and how to gather food, and find shelter. Their individual stories will follow accordingly based on their needs and how they meet them, all the while confronting an aggressive PvE that increases in difficulty as they advance in the world.
Monster spawn points aren’t set, so they usually wander from fringe and northern regions to swarm the valleys, drifting in higher amounts toward settlements. But they can also be encountered, intercepted, or lured everywhere on the map.
There are myriad roles players can follow, from being a hermit farmer to running with a mercenary gang, or leading a large trader clan. And the pacing is enhanced by an AI that takes over when players go offline, allowing configuration of their avatar’s tasks and behavior. So one can go from highly involved action combat on PC to asynchronous management of crafting and trade processes on a mobile device. 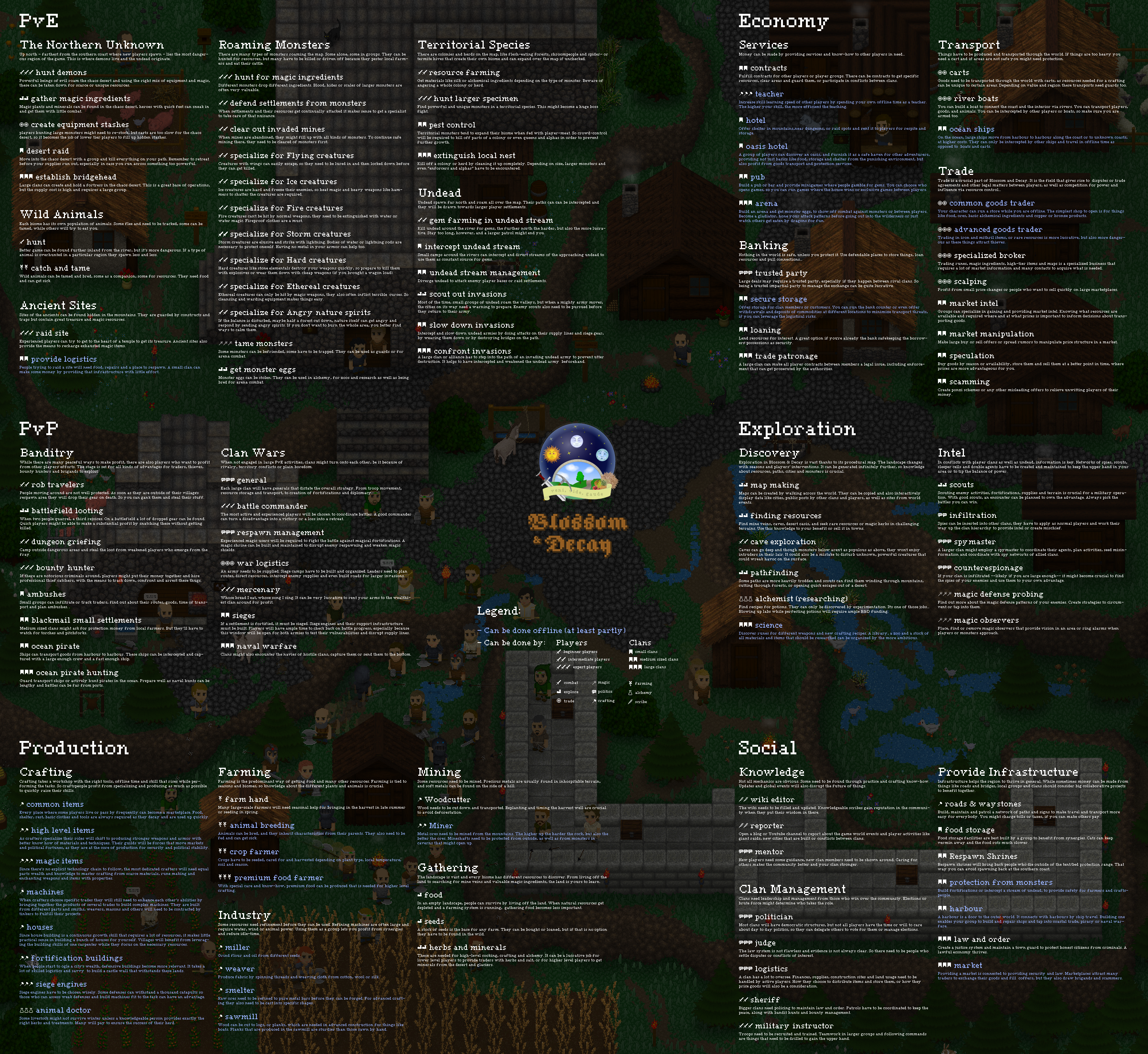 The sandbox economy is fully player-driven, so there are no NPC merchants in the game. All production and trade comes from players, even when they are offline, since the offline AI mode kicks into action with player-defined tasks.
Many resources are unique to specific regions, and certain plants or animals won't thrive in certain places. Goods have to be transported over vast distances and there is no easy fast-travel, like teleportation between cities. Transport routes will take days and lots of resources, so risk and other factors are important when players consider how to work together to move goods, as well as how they price them or where they engage in trade.
Players advance from sticks and stones to mithril crafting through five tiers that involve resources and skill acquirement.
Often trading with people above or below one’s tier can increase progress (to build machines earlier or easily get resources.)
All this opens the economy for crafty players to speculate and manipulate prices. Having information and connections at hand will be key to become a successful merchant. 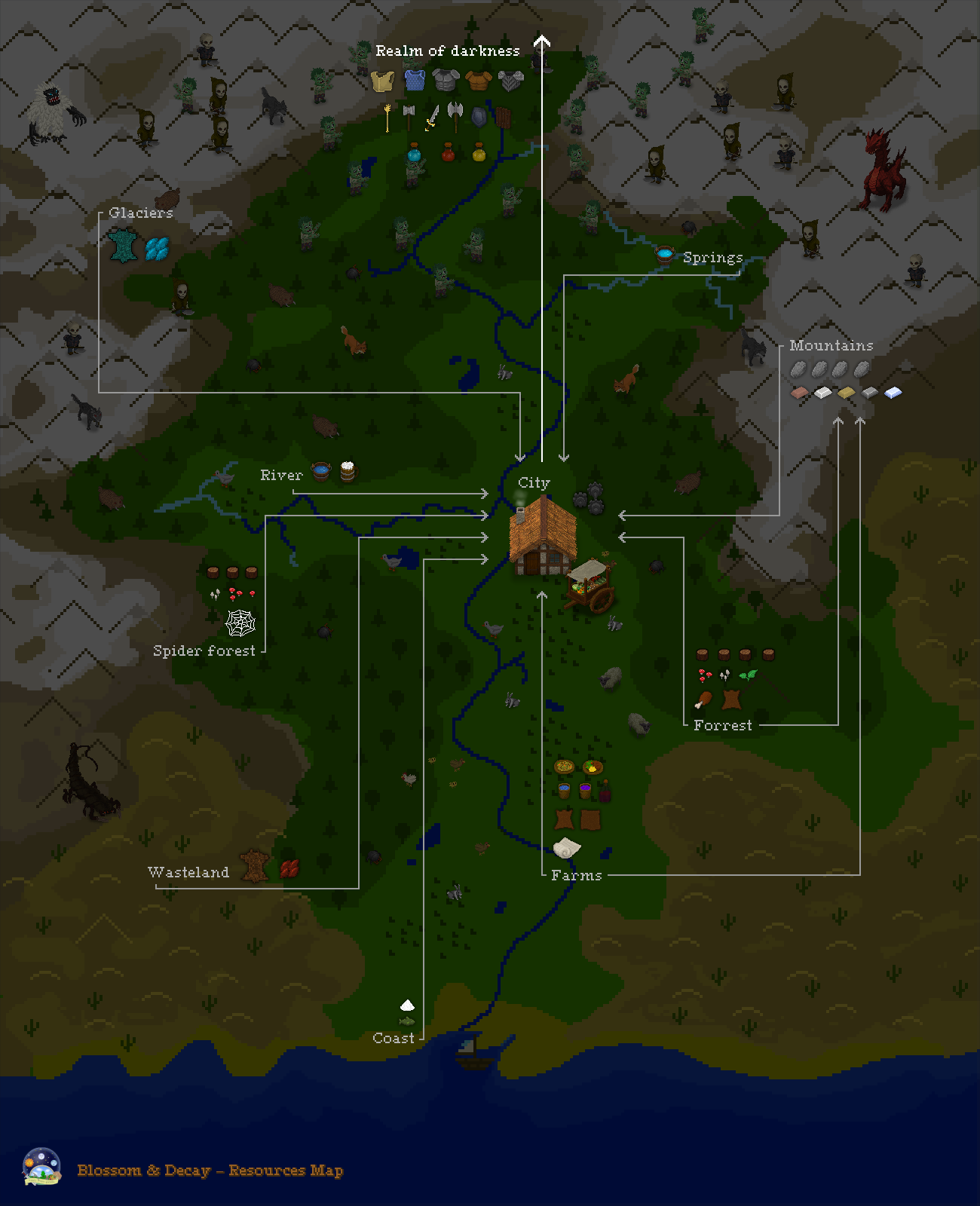 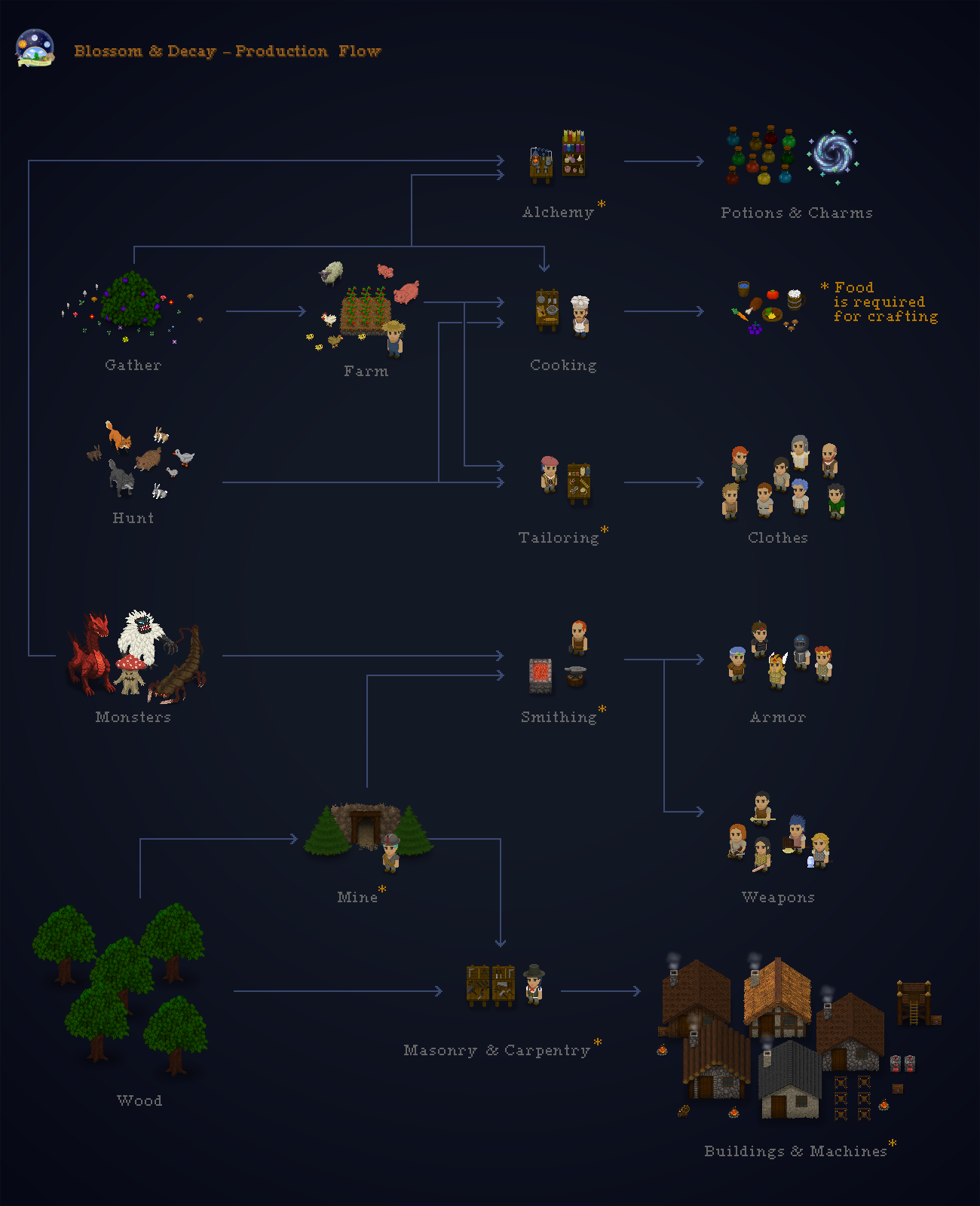 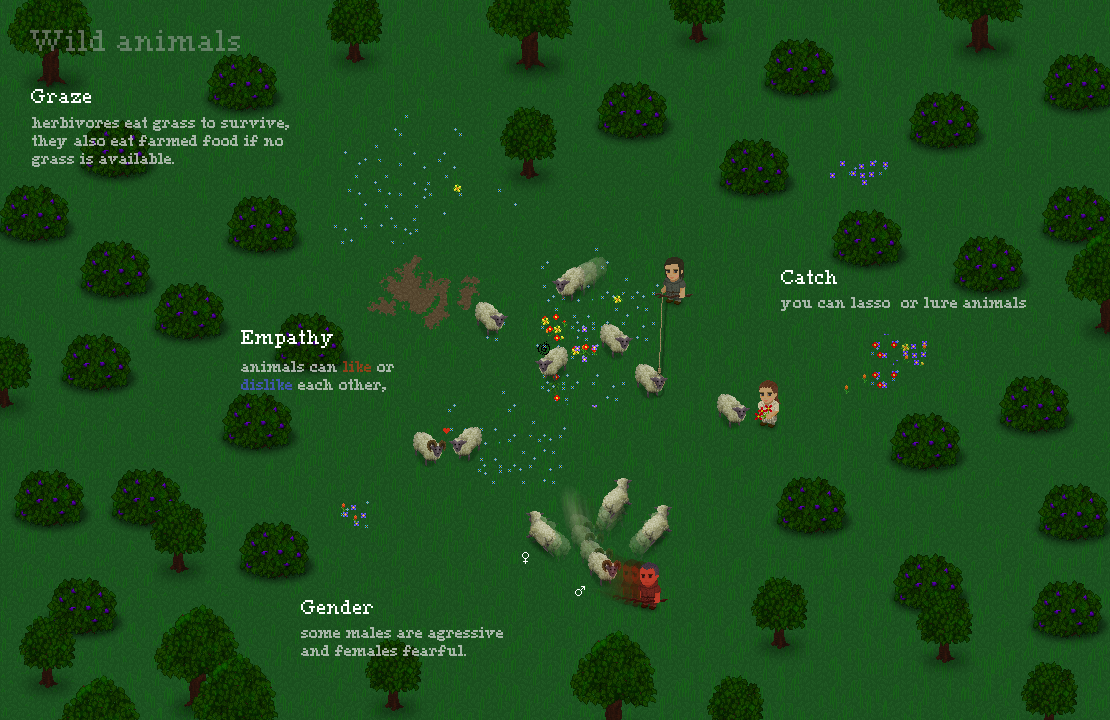 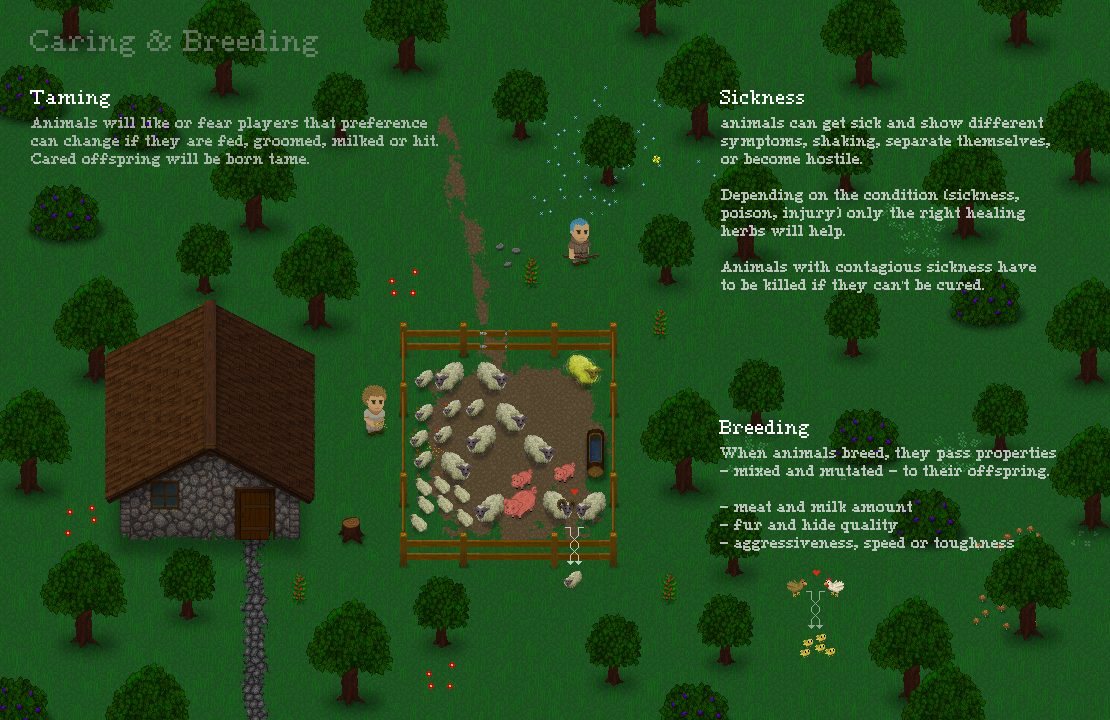 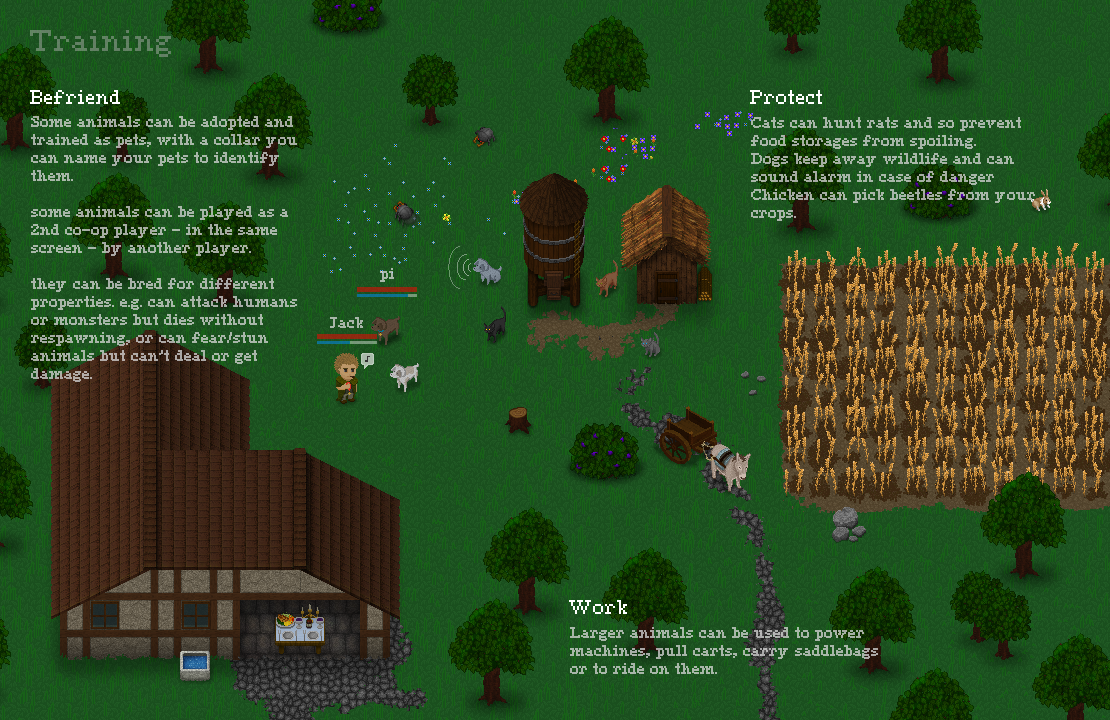 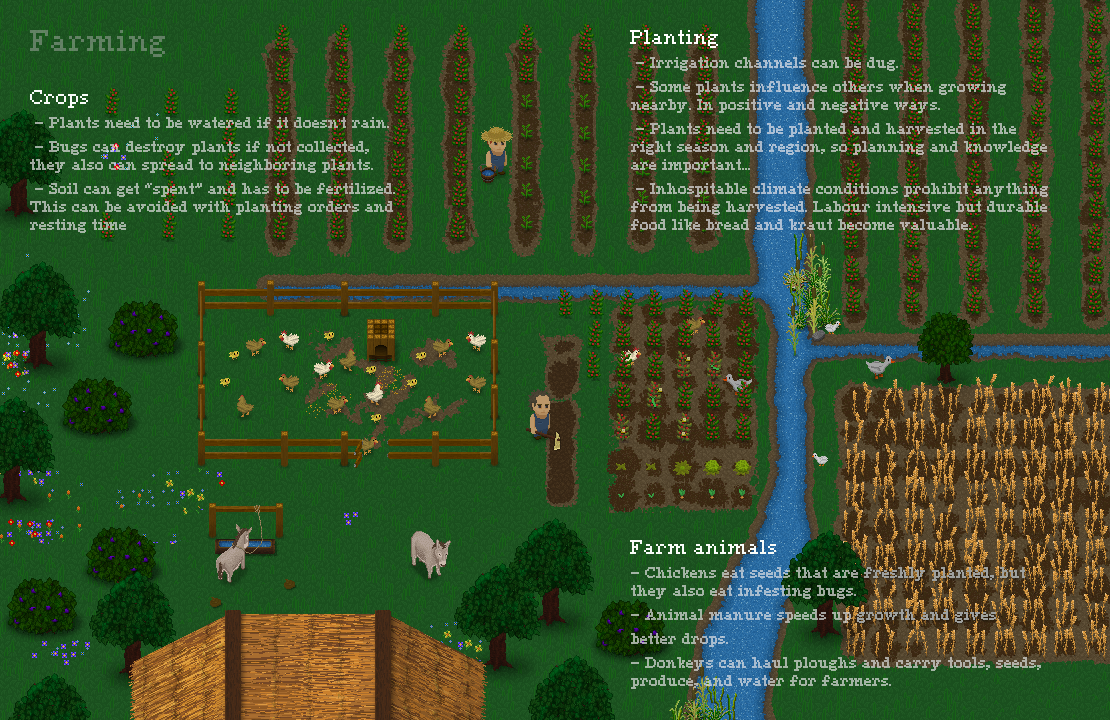 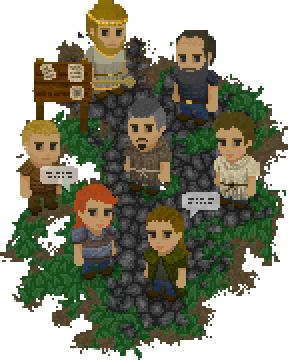 Initially, we published a rudimentary, combat demo to get a taste of fighting in the game, and we are currently testing a closed sandbox demo that introduces more complex mechanics like crafting, offline AI, procedural map generation, and others.
We wanted to develop a title founded on this vision of emergent narrative for years --like a mix that brought together the best of EVE and Ultima, but accessible and playable for a larger user base-- and we were astonished how little the topic was addressed in AAA titles.
We came from playing pen & paper games and wondered why digital games struggle with that same level of “making your own story” ?
Between the classic film-like cutscene-narrative and the theme park sandbox, we felt there was an in-between that should allow players to enjoy story and engagement at their own choosing and pacing.